Do you like Open Doors’ mission?  Would you want to share the work we do with others?

Become a Table Host for our annual Discover Open Doors!

At Discover Open Doors, you and your guests will hear from a few people whose lives have been significantly impacted by Open Doors.  There is no cost to attend

Contact Stacy Little, Development Director if you are interested in becoming a table host for Discover Open Doors 2016: SLittle@odkzoo.com or 269-343-6064 ext 304.

Open Doors just purchased a 6-unit apartment building in the Milwood neighborhood which will be used for families who need homes.

The apartment building was purchased with funds provided by the William and Julia Van Domelen Foundation.  In addition to providing funds to purchase the building, the foundation is providing the funds necessary to replace the building’s roof and boiler, improve the building’s insulation to reduce heating costs, and create a play area on the property for children.

The William and Julia Van Domelen Foundation previously made it possible for Open Doors to purchase Cooper Apartments on W Lovell Street in 2011 and 3611-3629 Duke Street in 2013.

The foundation has now funded the acquisition of 48 apartments for Open Doors.

“A home is necessary for a stable family life,” said Rick Stravers, Executive Director of Open Doors. “In order to grow and thrive, children need a home. We are grateful to the William and Julia Van Domelen Foundation for making it possible for Open Doors to help more families get homes for their children.” 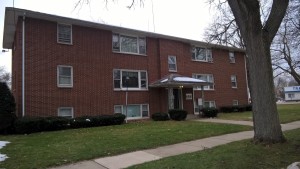 Losing your home is a personal nightmare.  So is losing your job, your car, or your health.  For Open Doors resident Contrina and her three children, all of these nightmares came true in the short span of one year.

Contrina was working as a hospice care aid when child care costs for her 5-year-old son, Myles, became overwhelming.  Unable to afford rent, the family was evicted from their home – a house where they had space for the whole family – and had to move into the basement of a friend’s house.  They were grateful for their friend’s willingness to open her home to them, but the living conditions were a far cry from what they were used to.

Princess, 16, describes it, “My sister and I shared a room in the basement.  My mom used an extra bed that was in the house and slept in the basement with my brother.  We didn’t have any dressers so we kind of had to make it work with totes and stuff.  It was really cold down there, smelled of mildew – all of our clothes smelled like mildew and it was just terrible, especially when it rained.”

Shortly after moving, Contrina lost her job.  Wanting to improve her options for future employment, she enrolled in classes in a healthcare training program and set her sights on a better future for herself and her children.  She was so committed to her education that even when she became seriously ill and was hospitalized, her classwork was still a high priority.

“I was in the hospital saying, ‘I need to get my homework done!  I need to be out of here in 24 hours so I can get my papers in.’  I was really determined because I have a family to take care of, I’m a single mom, and I knew that it would better me.  And I was determined to get us into our own place.”

The situation hit a new low when the friend they were living with lost her home.  The family moved in with another acquaintance, in a small apartment in a neighborhood where they did not feel safe.  “You talk about scary and unsafe.  That was the most terrifying thing I have ever done in my life.  And to have my girls in that neighborhood, and my son, it was a nightmare for me.”

Fortunately, the family didn’t have to stay there for long.  Contrina bumped into Open Doors Deputy Director, Stephanie, in a store one day.  Contrina opened up to Stephanie about her family’s situation saying, “I need help.”  Stephanie said, “Come see me.”

“I cried.  I just burst into tears right there in the store.  I just knew that God sent her.”

Stephanie was able to help the family get into an apartment, and their lives immediately started improving.  Contrina finished school and immediately got a job at Borgess Hospital.  She also received an Outstanding Student Award from the Michigan Association of Career Colleges and Schools, one of only two people to receive this award statewide.

The children are happy in their new home.  Morgon, 12, plays trombone in her school band and is making friendships that she was not able to make before.  “I’m really glad we moved here because in my old house, where I was going to school, I didn’t have very many friends.  Ever since we moved here I met some friends who live in these apartments and I changed schools, so I’ve made a lot of friends lately.”

Myles also has several new neighbor friends and musical aspirations of his own.  Contrina says, “I don’t know where it comes from but, ever since he’s been able to walk and move he knows music.  If you were to ask him what he wants to play, he’ll tell you, ‘I want to play tuba.’  He knows all kinds of instruments.  We don’t have instruments here but he knows what they are, he knows the sounds they make, he just loves music like that.”

Princess is a cheerleader and hopes to be a pediatrician one day.  She has inherited her mother’s academic drive, and recently received the National Academy of Future Physicians and Medical Scientists Award of Excellence.  She has been invited to Boston to attend a conference at Harvard University for three days in the spring and the family is working to raise funds for that.

Your donation becomes a very special gift to families like Contrina’s.  Open Doors helps over 170 people each year build new lives.  Lives of stability, rather than fear.  Lives where children can dream about their future instead of worrying about where they will sleep or eat tonight.

But the need for affordable homes is so great in our community that we continue to have a list of people waiting for homes.  We need your support to be able to continue helping people who need homes.    Please help us meet this need today. 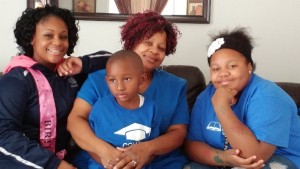